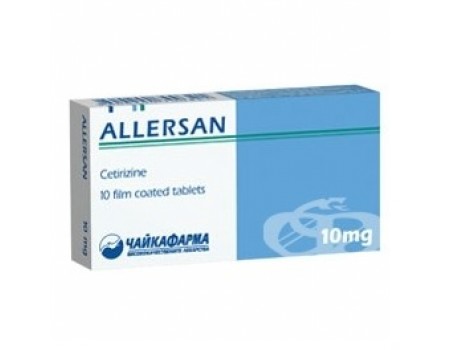 
4.2 Posology and method of administration
Adults and children over 12 years usually take 1 tablet (10mg Cetirizine) once daily.
Ceca aged 6 to 12 years : accepted 5 mg Cetirizine ( half tablet ) a day or two doses 10mg Cetirizine ( 1 tablet ) once daily. Can be assigned therapeutic dose of 5mg once daily if it leads to satisfactory control of symptoms.
Children under yrs : Alersan-Tchaikapharma tablets are not designed for this age group .
Patients with kidney disorders : Cetirizine dosage should be reduced according to the degree of impairment of renal function.
Children with impaired renal function the dose should be individualized according to renal clearance and weight of the patient.
In patients undergoing hemodialysis pa : Cetirizine was poorly cleared by hemodialysis. It is the individualization of dose in patients with moderate or severe renal impairment .
Patients with hepatic impairment : Dosage of Cetirizine is reduced according to the severity of the disease , usually taken 5 mg Cetirizine ( half tablet ) daily.
Elderly : Dose is determined by renal function.
Adoption of Alersan-Tchaikapharma not depend on diet . It is recommended to be tested in large amounts in non-irritating liquid absorption of the film-coated tablet .

4.4 Special warnings and special precautions for use
Caution is required in patients with kidney disease , liver failure and adult patients .
Not recommended adoption of large amounts of alcohol during treatment .


4.5 Interactions
Pharmacokinetic studies have been conducted on the interaction of cetirizine with pseudoephedrine , cimetidine, kegokonazol , erythromycin and azitromgshtin . There were no farmakokipetichni interactions.
Co-administration of cetirizine and macrolides or ketoconazole resulted in no clinically significant changes in ECG .
The extent of absorption is not altered by food, although the speed is reduced . Clearance of Cetirizine can be reduced with concomitant , taking Theophylline ( 16% ) with clinical signs of side effects of Cetirizine.


4.6 Pregnancy and lactation
In animal experiments not reported embryo- toxicity or teratogenicity. There is not enough research to application in humans.
Not recommended to take this medicine by pregnant and breast feeding mothers as cetirizine was excreted in milk.


4.7 Effects on ability to drive and use machines
Generation antihistamines belongs and cetirizine, gives less somnolence as compared with the drugs of the generation of I. Objective tests of psychomotor function and driving ability, no clinically relevant effects at the recommended dose of 10mg daily. However , drivers licenses, those working with machines requiring caution or in hazardous industries, who are treated with cetirizine should be warned about possible side effects. Alcohol and drugs , CNS depressants along with cetirizine may lead to further declines in attention , fatigue and drowsiness.


4.8 Undesirable effects
Unlike older Hl- receptor antagonists , cetirizine penetrates poorly into the central nervous system and results in significantly less sedation . Clinical studies have shown that the recommended dosage , cetirizine causes less side effects on the CNS, including somnolence , fatigue, dizziness and headache. In some cases there was a paradoxical stimulation of TsNS.Vapreki that cetirizine is a selective antagonist of peripheral H1 - receptor and its activity is antiholinerichnata minimized reported instances of urinary difficulties , eye accommodative disorders , and dry mouth (expression of holinolitichnoto effect).
Isolated cases of liver dysfunction with elevated bilirubin and elevated liver enzymes. In most cases these changes are normal after discontinuation of the drug.

Clinical trials *
Safety data were available after summarizing the results of a series of double-blind, placebo-controlled clinical and / or pharmacological studies involving 3200 patients treated with cetirizine at a dose of 1O mg / day. Although a statistically higher incidence than with placebo , somnolence was mild to moderate in the majority of cases. Objective tests as other studies have demonstrated that daily activity is unaffected at the recommended daily dose in young healthy volunteers.
Post-marketing studies
In addition to the adverse reactions reported during clinical studies and listed above po. , in the post -marketing period, however, are insufficient and ke are used to evaluate their frequency . They are varied and monitored by all organs and systems :


4.9 Overdose
In adults , overdose leads to excessive sleeping , while in children it can cause anxiety and irritability are possible symptoms of anticholinergic effects - urinary retention , dry mouth , diarrhea, confusion, dizziness , fatigue, headache , malaise , mydriasis , pruritus , restlessness , sedation , somnolence, stupor, tachycardia and tremor . Overdose is treated as a standard procedure , the treatment is symptomatic and auxiliary aimed at maintaining vital functions. There is no known specific antidot.Pri hemodialysis , only about 9% of the prescribed dose can be given .

Cetirizine is an antihistamine medicine long-acting second generation . It selectively inhibits peripheral H1 receptors and markedly not affect cholinergic , adrenergic or serotonin receptors . Among the classical antihistamine effect of cetirizine, it has a strong anti-inflammatory action, significantly inhibited the expression of adhesion molecules on epithelial cells (ICAM - 1 ) , inhibits the migration of inflammatory cells (EC , Leuc) and the formation of the inflammatory infiltrates . It inhibits the release of certain pro-inflammatory leukotrienes LTB4 and LTC4 and reduces the total number of inflammatory cells , as in IAR, and in LAR. Cetirizine inhibits significantly " minimal persistent inflammation ."


5.2 Pharmacokinetic properties
Cetirizine exhibits linear kinetics at a dosage of 5 to 60 mg. Noluzhivot terminal is about 10 h and volume of distribution is 0.50 I/Kg- not seen kumuliraie of cetirizine 10 MIC after taking a daily dose of 10mg. The maximum steady-state plasma kontsengratsiya approximately 300ng/ml and is reached after 1.0 ± 0.5h. Binding of cetirizine plasma protein was 93 ± 0.3%. Cetirizine does not modify the connection ' plasma proteins warfarin.Cetirizine not be extended first pass metabolism. About two-thirds of the dose was excreted . unchanged in the urine . Distribution of pharmacokinetic parameters ( peak level and area under the curve ) is the same in the study voluntary and there were no differences in the kinetics of cetirizine between black and white older men.
The extent of absorption of cetirizine is not reduced by the food , although the absorption rate is lowered.
The extent of bioavailability of cetirizine is the same irrespective of the formulation - the oral solution , capsule or tablet .

Special populations :
Elderly : Upon reception of a single per os dose of 10 mg cetirizine half- life increased by about 50% and clearance decreased by 40% in 16 elderly patients , as compared to younger patients . The reduction of the clearance in the elderly due to the decreased renal function. Children: half-life of cetirizme in children 6-12 years old is about 6 h, and in children aged 2-6 years was about 5 h. In infants and children from 6 to 24 months of age , he was reduced to 3.1 hours.
Patients with renal impairment : The pharmacokinetic profile of cetirizine in patients with mild renal insufficiency (creatinine clearance greater than 40 ml / min) is identical to that in healthy volunteers. In patients with moderate renal impairment is a threefold increase in plasma half - life and a 70% decrease in clearance compared to healthy volunteers.
In patients on hemodialysis ( creatinine clearance less than 7ml/mm) after administration of a single oral dose of 10mg cetirizine has a threefold increase in half-life and 70% decrease in clearance compared to healthy subjects. Cetirizme poorly cleared by hemodialysis. It is the individualization of dose in patients with moderate or severe renal impairment ( see section 4.2 )
Patients with hepatic impairment : In patients with chronic liver diseases ( hepatocellular , cholestatic, and biliary cirrhosis) after taking 10 or 20mg cetirizine is an increase in plasma half-life by 50 % and 40 % decrease in clearance compared to healthy subjects.


5.3 Preclinical safety data
Following an acute oral administration of cetirizine illegal maximum dose varies in different animal species than 500 times ( in females ) to 1600 times ( in dogs) than the recommended therapeutic dose of 10mg per day for adults ( 350 times via iv in dogs) .
When treated with repeated doses peroralki targentnite authority in rodent liver ( weight gain , hypertrophy of hepatocytes and fat accumulation ) . Levels of cetirizine, which do not cause hepatic changes were more than 100 times higher than the recommended doses for clinical upotreba.Tryabva be noted that cetirizine has had an inhibitory effect on liver enzyme only in mice and rats , moreover ttdlostniyat pharmacokinetic profile in rodents are different from that in humans . Changes in liver enzymes are fully reversible after stopping lechenieto.Pri other animal species (dogs, monkeys) that lie closer to the pharmacokinetics in humans cetirizme no liver effects.
No effect levels are 40 times (dogs, 6 months), to 75-220 times ( dogs 4 weeks) and 85 times ( monkeys sedmipi 4 ) over a clinically recommended doses in humans .
Effects were nonspecific : a slight change in behavior , decreased body weight and reproduction dr.Prouchvaniyata not show specific toxic effect of cetirizine on reproduction and development of the newborn. No effect levels are 20 to 480 times (in terms of fertility in mice) and 120 times (during the perinatal period in mice ) is greater than the recommended clinical dose.
Cetirizine was not mutagenic and carcinogenic effects in hora.Pri histamine induced bronchospasm in guinea pigs with iv doses more than 200 times the ED50, cetirizine did not prolong the QT interval.
Cetirizme not affect QT in dogs and monkeys when administered orally for one year at daily doses up to 275 and 225 times the recommended human dose .


6.2 Fizizko Incompatibilities
He is known incompatibility of orally administered Cetirizine with another medicine.


6.4 Special precautions for storage
Store in a dry place inaccessible for days at a temperature below 25 ° C.


6.6 Recommendation for use
The product is intended for oral administration. 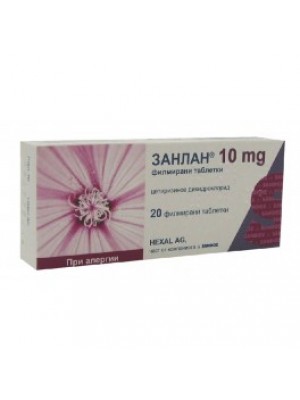 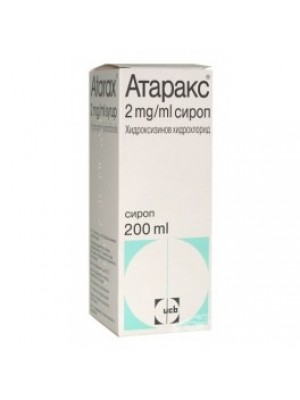 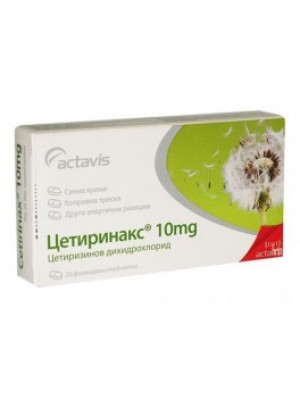 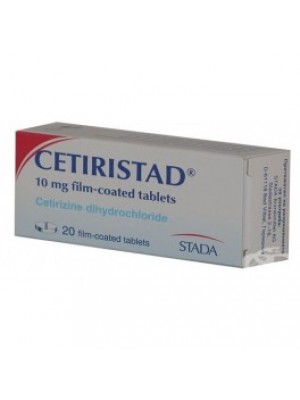 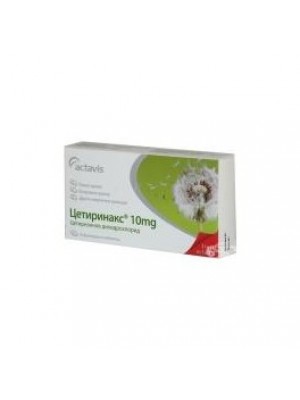