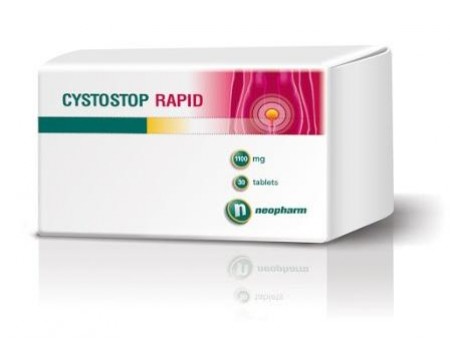 Cystostop is a preparation that quickly and permanently relieves the symptoms of discomfort in the urinary tract (urethra, bladder, kidneys).

Cystostop is developed in 2 varieties:

Cystostop Chrono - designed for cases of chronic and recurrent episodes of urinary discomfort.

The other ingredients in the tablet are calcium phosphate, maize starch, copovidone, povidone and magnesium stearate.

The other ingredients in the tablet are calcium phosphate, maize starch, copovidone, povidone and magnesium stearate.

Cystostop is a dietary supplement.

II. HOW DOES CYSTOPOST WORK AND FOR WHOM IS IT INTENDED?

A. Cystostop Rapid is most effective in the initial phase, at the first appearance of symptoms (burning, frequent and painful urination, groin pain, cloudy urine, etc.). When the cause of discomfort is E. coli (85-90% of cases) the effect is very fast and significant relief is felt in the first hours after taking the drug. In most cases, the complaints completely subside the next day.
Cystostop Rapid is especially effective in women with urinary tract problems related to sexual intercourse.

B. Cystostop Chrono maintains optimal urinary tract health and prevents recurrence of urinary discomfort. Cystostop Chrono is particularly suitable for administration immediately after controlling the acute episode of urinary discomfort in order to prevent the risk of chronic problems, as well as in people with frequent urinary tract problems to prevent a new recurrence.

III. WHO SHOULD NOT TAKE Cystostop?

Do not take Cystostop if you have ever had an allergic reaction to any of the ingredients in the tablet.

The most common symptoms of an allergic reaction include rash, itching, swelling of the lips and face, shortness of breath. Talk to your doctor if you experience any of these symptoms.

IV. WHAT ARE THE SIDE EFFECTS OF Cystostop?

So far there are no known side effects of the drug and contraindications for its use. Its tolerability is very good, which allows safe reception for a long period of time. Cystostop can be used without restrictions during pregnancy and lactation, as well as in patients with diabetes.

It is also suitable for children over 3 years of age, as the dose is determined by the attending physician according to the child's weight.

V. HOW SHOULD CYSTOST BE TAKEN?

Take Cystostop Rapid at the first signs of urinary discomfort.

During the first two days Cystostop Rapid is taken every 2-3 hours for 2 tablets or a total of 6 doses of 2 tablets per day.

On the third day Cystostop Rapid is taken in a dose of 3 times 2 tablets.

Unless your doctor recommends otherwise, Cystostop Chrono is taken as 1 tablet twice a day.

Store Cystostop in its original packaging at a temperature of 15 to 25 ° C in a dry place without direct access to sunlight, out of reach of children. Do not use the product after its expiration date or if the integrity of the package is compromised.

Urinary tract discomfort can sometimes be due to harmless functional disorders in the urinary tract due to colds, neurological disorders or physical overload, but most often due to a bacterial infection, the cause of which in 85-90% of cases is E. coli . The infection can affect the urethra (urethritis), bladder (cystitis) or kidneys (pyelonephritis).

Once in the urinary tract, pathogenic bacteria attach to their surface through pip-like growths.
D-mannose

D-mannose binds and blocks the fimbriae of bacteria through which they attach to the urinary tract. Thus, blocked fimbriae cannot perform their functions, as a result of which the bacteria remain free in the urine and are easily excreted when urinating.

In addition, D-mannose supports and strengthens the immune system.

Proanthocyanidins (in the composition of the extract of American cranberry)

Flavonoids (in the composition of birch leaf extract)

The flavonoids in birch leaf extract have a pronounced diuretic effect and help to remove bacteria from the urinary tract faster.
The other biologically active substances (tannins, terpenes, catechins, betulorentic acid, potassium nitrate, etc.) have anti-inflammatory, antimicrobial, antispasmodic and astringent action, which further strengthens the excretory system and helps to permanently eliminate the infection.