What DALTEX is and what it is used for

The active substances in DALTEX, vildagliptin and metformin, belong to a group of medicines called 'oral antidiabetics'.

DALTEX is used to treat adult patients with type 2 diabetes. This type of diabetes is also known as non-insulin dependent diabetes mellitus.

Both insulin and glucagon are produced in the pancreas. Insulin helps lower blood sugar levels, especially after meals. Glucagon triggers the process of sugar production by the liver, which leads to an increase in blood sugar levels.

2. What you need to know before you take DALTEX

if you are allergic to vildagliptin, metformin or any of the other ingredients of this medicine (listed in section 6). If you think you may be allergic to any of them, talk to your doctor before taking DALTEX.
if you have or have had uncontrolled diabetes, such as severe hyperglycaemia (high blood sugar), nausea, vomiting, diarrhea, rapid weight loss, lactic acidosis (see “Risk of lactic acidosis” below) or ketoacidosis. Ketoacidosis is a condition in which substances called 'ketone bodies' accumulate in the blood and this can lead to diabetic overeating. Symptoms include stomach pain, rapid and deep breathing, drowsiness, or an unusual fruity odor on your breath.
if you have recently had a heart attack or if you have heart failure, or serious circulatory problems, or difficulty breathing, which may be a sign of heart problems.
if you have severely reduced kidney function.
if you have a severe infection or severe dehydration (you have lost a lot of water from your body).
if you are about to have a contrast X-ray (a specific type of X-ray that involves injecting a dye). Please also see the information in the "Warnings and Precautions" section.
if you have liver problems.
if you drink too much alcohol (whether every day or occasionally).
if you are breast-feeding (see also 'Pregnancy and breast-feeding').
Warnings and precautions

Risk of lactic acidosis
DALTEX can cause a very rare but very serious side effect called lactic acidosis, especially if your kidneys are not working properly. The risk of developing lactic acidosis is also increased by uncontrolled diabetes, severe infections, prolonged fasting or alcohol consumption, dehydration (see more information below), liver problems and any condition in which part of the body has a reduced oxygen supply ( as an acute severe heart disease).
If any of the above apply to you, talk to your doctor for further instructions.

Stop taking DALTEX for a short period of time if you have a condition that may be associated with dehydration (significant loss of body fluids) such as severe vomiting, diarrhea, fever, heat exposure or if you drink less fluids than normal. Talk to your doctor for further instructions.

Stop taking DALTEX and contact a doctor or the nearest hospital immediately if you have any of the symptoms of lactic acidosis, as this condition can lead to coma.

Symptoms of lactic acidosis include:

DALTEX does not replace insulin. Therefore, DALTEX should not be used to treat type 1 diabetes.

Talk to your doctor, pharmacist or nurse before taking DALTEX if you have or have had pancreatic disease.

Talk to your doctor, pharmacist or nurse before taking DALTEX if you are taking an antidiabetic medicine known as a sulphonylurea. Your doctor may ask you to reduce the dose of your sulphonylurea when you take it at the same time as DALTEX to avoid the risk of low blood sugar (hypoglycaemia).

If you have taken vildagliptin in the past but have had to stop taking it due to liver disease, you should not take this medicine.
You will be tested for liver function before starting treatment with DALTEX at quarterly intervals during the first year and periodically thereafter. This is necessary so that the signs of elevated liver enzymes can be detected as soon as possible.

During treatment with DALTEX, your doctor will check your kidney function at least once a year or more often if you are elderly and / or if you have impaired kidney function.

Your doctor will check your blood and urine regularly to determine your sugar levels.

Other medicines and DALTEX
If you need to be injected with an iodine-containing contrast agent into your bloodstream, for example in the context of an X-ray or a scan, you must stop taking DALTEX before or during the injection. Your doctor will decide when to stop and when to resume treatment with DALTEX.

Tell your doctor if you are taking, have recently taken or might take any other medicines. Your blood glucose and kidney function may need to be tested more often, or your doctor may need to adjust your DALTEX dose. It is extremely important to mention the following:

glucocorticoids, which are mainly used to treat inflammation;
beta-2 agonists, which are mainly used to treat respiratory diseases;
other medicines used to treat diabetes;
drugs that increase urine output (diuretics);
drugs used to treat pain and inflammation (NSAIDs and COX-2 inhibitors, such as ibuprofen and celecoxib);
some medicines to treat high blood pressure (ACE inhibitors and angiotensin II receptor antagonists);
certain drugs acting on the thyroid gland;
some drugs acting on the nervous system.
DALTEX with alcohol
Avoid excessive alcohol consumption while taking DALTEX, as this may increase the risk of lactic acidosis (please see section "Warnings and precautions").

Pregnancy and lactation
If you are pregnant, think you may be pregnant, or are planning to have a baby, ask your doctor for advice before taking this medicine. Your doctor will discuss with you the possible risk of taking DALTEX during pregnancy.

Driving and using machines
If you feel dizzy while taking DALTEX, do not drive or use any tools or machines.

The amount of DALTEX that people need to take is different and depends on their condition. Your doctor will tell you exactly what dose of DALTEX to take.

Always take this medicine exactly as your doctor has told you. If you are not sure, talk to your doctor or pharmacist.

Your doctor may prescribe this medicine for you alone or with certain other medicines that lower your blood sugar.

When and how to take DALTEX

Swallow the tablet whole with a glass of water.
Take one tablet in the morning and the other in the evening during or immediately after a meal. Taking the tablet immediately after a meal will reduce the risk of stomach irritation.
Continue to follow any advice regarding the diet prescribed by your doctor. Especially if you are on a diet to control your weight for diabetes, continue to follow it while you are taking DALTEX.

If you take more DALTEX than you should
If you take too many DALTEX tablets or if someone else takes your tablets, contact your doctor or pharmacist immediately. You may need medical attention. Take the pack and this leaflet with you if you need to see a doctor or go to the hospital.

If you have any further questions on the use of this medicine, ask your doctor, pharmacist or nurse.

4. Possible side effects
Like all medicines, this medicine can cause side effects, although not everybody gets them.

You should stop taking DALTEX and contact your doctor immediately if you get the following side effects:

DALTEX can cause a very rare but very serious side effect called lactic acidosis (see section “Warnings and precautions”). If this happens, you must stop taking DALTEX and contact a doctor or the nearest hospital immediately, as lactic acidosis can lead to coma.
Angioedema (rare: may affect up to 1 in 1,000 people): Symptoms include swelling of the face, tongue or throat, difficulty swallowing, difficulty breathing, sudden rash or hives, which may signal a reaction known as 'angioedema'. “;
Liver disease (hepatitis) (rare): Symptoms include yellowing of the skin and eyes, nausea, loss of appetite or dark discolouration of the urine, which may signal liver disease (hepatitis);
Inflammation of the pancreas (pancreatitis) (not known): Symptoms include severe and prolonged abdominal pain (in the stomach area) that may spread to the back, nausea and vomiting.
Other side effects
Some patients have experienced the following side effects while taking vildagliptin and metformin hydrochloride:

Very common (may affect more than 1 in 10 people): nausea, vomiting, diarrhea, pain in and around the stomach (abdominal pain), loss of appetite.
Common (may affect up to 1 in 10 people): dizziness, headache, uncontrollable trembling, metallic taste, low blood sugar.
Uncommon (may affect up to 1 in 100 people): joint pain, tiredness, constipation, swelling of the hands, ankles or feet (swelling).
Very rare (may affect up to 1 in 10,000 people): sore throat, runny nose, fever; signs of high levels of lactic acid in the blood (known as lactic acidosis) such as drowsiness or dizziness, severe nausea or vomiting, abdominal pain, irregular heartbeat or deep, rapid breathing; redness of the skin, itching; decreased levels of vitamin B12 (paleness, fatigue, mental symptoms such as confusion or memory impairment).
Some patients have experienced the following side effects while taking vildagliptin and metformin hydrochloride and a sulphonylurea:

Not known (cannot be estimated from the available data): itchy rash, inflammation of the pancreas, localized skin peeling or blistering, muscle pain.
5. How to store DALTEX

Keep out of reach of children.

Do not use this medicine after the expiry date which is stated on the blister and the carton after EXP. The expiry date refers to the last day of that month.

This medicinal product does not require any special storage conditions. Store in the original package in order to protect from moisture.

6. Contents of the package and additional information 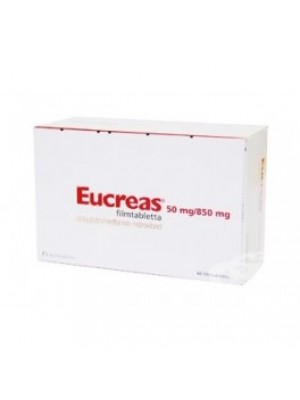 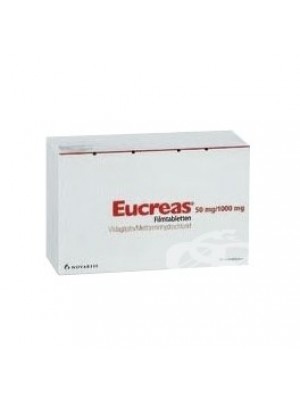 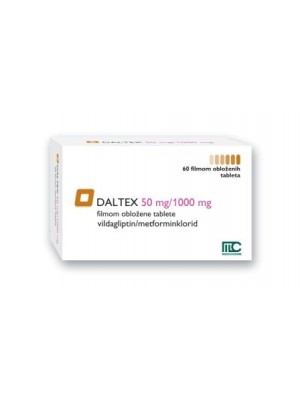